Alejandro Lugo is adapting to driving in the U.S. In his hometown of San Salvador, he says he’s used to getting away with things.

In El Salvador, Lugo explains, he didn’t trust the police. So, he didn’t stop if a policeman tried to pull him over.

“In my country, you’d be scared to pull over for a cop because you’re not sure if they’re actually policemen or thieves,” he says. “You would rather be considered a delinquent and not stop than to get shot.”

Driving around in Reno, Nevada, Lugo is afraid of getting pulled over by a cop. He is driving without a license.

“I’m scared that I would get taken away,” he says.  Even though people say that doesn't happen, I don't know that for sure. They might take me away, detain me and turn me over to ICE [Immigrations and Customs Enforcement],” he says.

The state of Nevada issues driver licenses to undocumented immigrants like Lugo. When he first arrived in Reno he began the process of getting his license, but the current political climate has made him change his mind.

“I don’t want to be registered anywhere as undocumented, because that might get the attention of immigration authorities,” he says.

The best protection against getting pulled over by a cop, Lugo says, is driving carefully. He makes sure to drive only when necessary. On average, he spends 5 hours per week in his car, driving from one job to the next. The only other time he drives is when he goes to the grocery store.

“There are a lot of places I would like to drive to and spend some time there, but because of the situation I could get in, I prefer to stay here in the city,” he says. “I prefer locking myself in my room, waiting for the next day to come so I can go back to work.”

Lugo wants to stay focused while driving , so he got rid of distractions like his radio.

“I just took it out because i want to be focused on driving, I want to concentrate,” he says.

He really enjoys listening to music, especially Spanish rock, but would rather drive in silence than risk making a mistake that could potentially get him deported.

Before immigrating to America, Lugo was really close to graduating from university in El Salvador. He was well situated financially and had a family. It wasn’t the “American Dream” that motivated him to migrate to America. Instead, he wanted to leave behind the violence and extortions in El Salvador.

“What was the point of living well, dressing well and having a good job when your life is at risk?” he says.

Lugo’s hometown, San Salvador, is one of the most violent cities in the region. A report by the Technological University of San Salvador showed that of 747 Salvadoran migrants surveyed, 42 percent said they left their homes because of violence, compared to just five percent who cited that reason in 2013.

“I never imagined myself working as housekeeper, or pushing wheelbarrows full of sand,” he says.

He’s working hard to learn English and to make enough money to change his legal status. He hopes of one day being able to fulfill his dream of working in an office as an accountant. 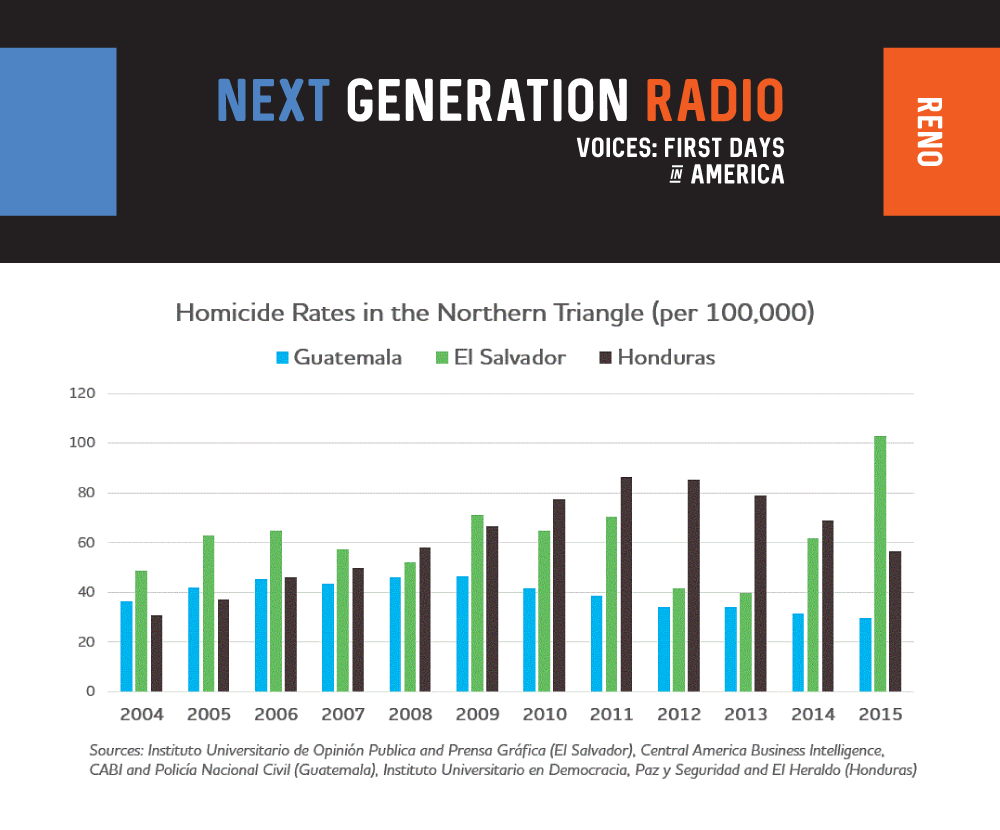