Rawdhah Al Salihi was scared to come to the United States. The 49-year-old Iraqi immigrant had seen movies depicting Americans as mean and unpleasant. Some experiences she and others had with U.S. soldiers led to similar conclusions. When death threats forced her to flee her country, Al Salihi was reluctant about making the United States her home.

But all that changed when Al Salihi walked into a Denver  IHOP.

“The first day in the United States, was like 9 in the morning, we came here to the IHOP and everybody was welcoming and everybody was, ‘Hi guys how are you doing?’ And, it was wonderful,” Al Salihi said.

Today, many of Al Salihi’s perceptions of the United States have completely changed. As a case manager at the Northern Nevada International Center, Al Salihi uses her experiences from her own journey to help newly arrived refugees and immigrants.

“I encourage them to start all over again,” Al Salihi said.

Al Salihi is from Baghdad, Iraq. She fled in 2006 after receiving a series of death threats, which she believes were a result of her work with the U.S. Agency for International Development.

Even though her husband was American, Al Salihi first fled to Sweden, because she was hesitant to come to the U.S.

“You built this knowledge from interaction with the army, so it’s different than when you interact now, with the people, the American people, they are very nice people,” she said.

She initially wondered how friends and family would react to her move, based on their opinions of Americans and U.S. soldiers.

Besides the movies, which depict the U.S. as a country of “rape,” “drugs,” “gangs” and burglary, Al Salihi said, there were other reasons behind these negative opinions of Americans.

“I got a lot of friend and family accidentally hit and shot by the American army,” Al Salihi said. “I'm telling to everybody now, when I see the generosity of American people, just separate the power, or the politic, from the normal people in, in the States, they are very, very nice people.”

After receiving a death threat through e-mail in Iraq, Al Salihi was motivated to hire a driver to keep her safe during her commute. After just a few weeks of driving, the chauffeur resigned due to intimidation and being forced to relay another death threat to Al Salihi.

Al Salihi flew across the border to Jordan to live with her sister for two months. She returned to Iraq only to receive yet another death threat in the mail — a bullet wrapped in a threatening note. The letter advised her to leave the country within three days.

Al Salihi knew she had to leave for her safety.

“If you have a money, if you have anything in the world, but you are not safe, it doesn't mean anything for you,” Al Salihi said.

She headed to Sweden, where she lived in a refugee camp for three months, sharing a room with an Eritrean woman and a Somali woman.

Al Salihi came to the U.S. for the first time in 2009 for three months on a temporary visa. She eventually returned to Sweden, but was later approved for a green card to relocate to the United States in 2013.

She remembers arriving in Denver, where a U.S. Customs and Border officer said to her, “Welcome home.”

The interaction would leave an impression on her.

That greeting and her first experience at the Denver IHOP continues to shape her view of America today.  Every Saturday, she and her family go to the restaurant, where they sit in the same booth and the waiters already know what they’ll order — no pork, only turkey bacon.

Al Salihi claims to be hooked on the French vanilla creamer. 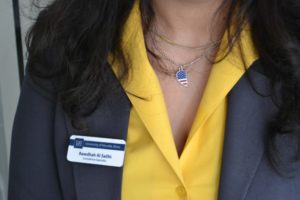 Rawdhah Al Salihi, 49, talked about her first days in the United States on Tuesday, May 23, 2017 . She wore a new necklace for the first time.

Her 7-year-old son, Jacob Hasenhohrl asked her to purchase the necklace, as well as a matching one for him to wear, from a gift shop on the USS Hornet during a recent trip to Alameda, California.

The necklace is half of a broken heart, incorporating the American flag. Jacob, who was born in Sweden and is a dual citizen, wears a similar necklace adorned with the heart’s other half.

Iraqis ask "Why you are helping them? Why you work with our enemy?" says Rawdhah who says her @USAID work led to death threats #nextgenradio pic.twitter.com/lHuXxM4zhc